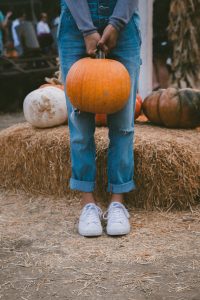 Fall is now upon us and Halloween is just around the corner. Scary decorations catch your eye in the store, popular character costumes fill the racks, and kids are talking at school about what they want to dress up as. But for many Christians, this is a difficult holiday to deal with. Is it honoring to God to celebrate Halloween? Is it an evil holiday that we should avoid? Is it something that we should celebrate? Is it something we should be extremely cautious about? Hopefully this two part series will provide some information and guidance so that you can make an informed decision for your family. And of course, listening to the Holy Spirit and the Word of God on this matter will guide you to the right decision.

The History of Halloween from a Christian Perspective

Before we discuss if and how we should celebrate Halloween with our children, we need to start by looking at the history of Halloween. This is really the foundation of our discussion and seeing how it was originally intended will help you gain perspective on the holiday. It is not what most people think: what started out as a pagan holiday developed into a positive celebration of Christ’s power over evil.

While there are many beliefs about how Halloween came about, let’s first look at the history that most people agree with. Halloween started out as a Celtic holiday in Ireland as a costume party the night before a feast called Samhain. It was a feast to commemorate lost relatives and to give thanks for the end of summer. Superstition made them believe that the eve before the feast was a time to ward off the evil spirits that would attack the feast. The Druids, who were the Celtic ruling class, would then require everyone to dress up like goblins, witches, and devils and carve ugly faces into gourds and put candles inside them in order to ward off the evil spirits. This would then ward off the spirits from the feast the next day.

When the Christian missionaries journeyed from Europe and arrived in the land of the Celts, the Druids became eager for all their people to become Christians after hearing the gospel from the missionaries. They wanted to denounce their pagan gods and the practices of appeasing or casting off evil spirits. In time, they adapted and combined the tradition of their feast on November 1 and “all Hallows Eve” together with the Gospel. The Christian monks decided it would be an effective way to share the Gospel and dispel and lay to rest the Celts’ superstition about ghosts and the power of demonic spirits. That Christ, their Creator and Savior, defeated Satan, death, and evil at the cross and through Him alone, evil demons were powerless and would flee.

Halloween and the Samhain Feast also provided an opportunity to be reminded of or learn about Christian heroes and martyrs along with the Celts continuing to officially recognize and commemorate the souls of their blessed dead who had been declared saints.

Many scholars agree that the commemoration of saints on November 1 first originated in Ireland, spread from there to England, and then to the continent of Europe with the rise of Christianity. By the ninth century, the Roman Catholic Church adopted the Celts’ Halloween tradition and Pope Gregory IV sent out an official letter of notification urging that Halloween be observed in harmony with All Saints Day throughout the Roman Empire.

The History of Halloween Summary

So what originally started out as a pagan holiday eventually became a celebration. It reminded people that Christ overcame death and Satan by dying on the cross. And no matter what Satan throws at the believer, Christ has overcome! (I John 4:4)

Now that we have a deeper understanding of the history of Halloween, the question is: How should we celebrate Halloween with our children as Christians? Look for Part 2 of this blog series that addresses this question in the coming weeks.