The Lost Art of Art 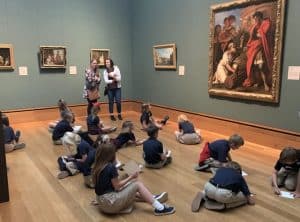 When was the last time you attended an art museum, a jazz concert, a ballet, or a play? If you said years, you wouldn’t be alone. Sadly, across the U.S., the appreciation of fine arts has declined in the last couple of decades described in a Forbes article, “Do the Fine Arts Have a Future?  According to the National Endowment for the Arts (NEA), only 33% of Americans attended a “benchmark” cultural event even once in 2012—down from 39% in 2002 and 41% in 1992. These cultural events include attending art museums, musicals, classical music concerts, non-musical plays, jazz concerts, ballet performances and operas.

So why the decline in art appreciation? It could be due to our culture being drenched in technology, either being entertained by YouTube videos or “appreciating” art by looking at the Mona Lisa from their handheld screen instead of seeing it in person. Schools have been moving away from a liberal arts focus and more towards a STEM (Science, Technology, Engineering, Mathematics) focus. But I believe teaching and showing our children and ourselves this lost art has multiple benefits including cultural education, historical education, communication skills, insights into other fields of study, and inspiration and motivation to create.

Did you know that the Sistine Chapel was painted by someone who would not call himself a painter by profession?  He referred to himself as a sculptor. Pope Julius II, as head of the church in Rome recognized the amazing talents of Michelangelo Buonarroti and commissioned him to paint the ceiling of the Sistine Chapel in Rome.  With only a short apprenticeship several years prior with painter Domenico Ghirlandaio, Michelangelo used a special technique called fresco painting.  His assistants applied plaster to a section of the ceiling. Then the masterpieces were painted directly into the wet plaster.  Over 500 years later, students of all ages can appreciate the beauty of Michelangelo’s fresco paintings, proving unique and beautiful art can transcend multiple generations.

Art appreciation allows students to learn about other cultures and see a glimpse of history.  Painters, sculptors, and other types of artists are influenced by their own life circumstances as well as the circumstances and technology around them as they are creating art.  For example, the Sistine Chapel paintings were completed during a time in history called the Renaissance at a time in church history called the Reformation. Imagine how seeing paintings of the time of the Renaissance can enhance studying other aspects of the Renaissance era.

Art appreciation improves communication.  I’m sure you have heard the phrase, “A picture is worth a thousand words.” Artists, since the beginning of time, have been communicating information through their pictures.  Students who study artwork together strengthen their own communication abilities because the pictures stimulate emotional feelings which then are translated into conversations. For example, read a few of the reviews on trip advisor, to understand the emotional impact the Sistine chapel has on vacationers.

A professor of art crime named Noah Charney pointed out that art appreciation provides additional insight into other fields of study such as sociology, geometry, science, physics, engineering, and politics to name just a few.  Mr. Charney mentioned in his article “The Art of Learning: Why Art History Might Be the Most Important Subject You Could Study Today,” that the preparation of paint is an example of chemistry.  Look closely at the method of fresco painting and this certainly shows a lesson in chemistry.  Geometry explains how some paintings look more harmonious. Take a second look at Michelangelo’s paintings to see that the figures almost look like sculptures. Can you imagine which branch of science helps explain this phenomenon?

Art appreciation inspires and motivates us to create.  Heritage Oak School in Tehachapi, California, also believes in the benefits of art appreciation. Not only does the school provide field trips to the Bakersfield Symphony and the Getty Museum, for example, they also provide a dedicated art appreciation curriculum called “Meet the Masters.”  Students hear stories about famous artists, view their artwork, and have a chance to create their own masterpiece inspired by what they learned. The enthusiasm created in these classes motivates them to use their imagination to design something of their own and also appreciate art when seen in person.  My daughter was in second grade when she learned about Michelangelo. Our family had an opportunity to visit Rome and see the Sistine Chapel. Because she had learned so much in her art appreciation classes, she was intensely excited to be where history had occurred over 500 years previously.